me vs. the Phonogramm maybe once again 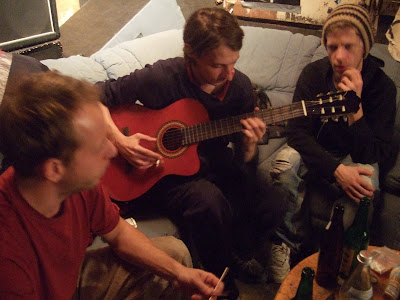 ale krause and phonogramm will play live at broncos bar again on wed, 4th of November supported by maxxx power - one of the best djs for the black music in town - ask hasmuth!... but I am not sure if hasmuth likes me to go down there, cause we have run into some kind trouble again recently
.and now ... .. finally, and here is my cool interview with phonogramm i did onna last friday at their practice room 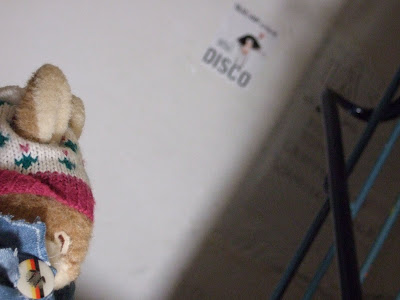 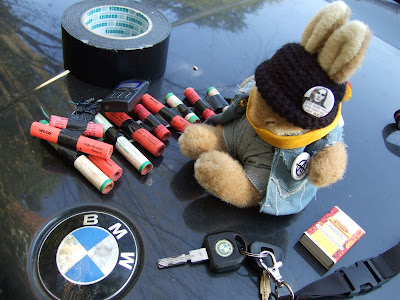 today i got up too early and unfortunately I started off my day by using my left paw first and it hurt and now i am getting mad and i will make sure that i am getting back at them! 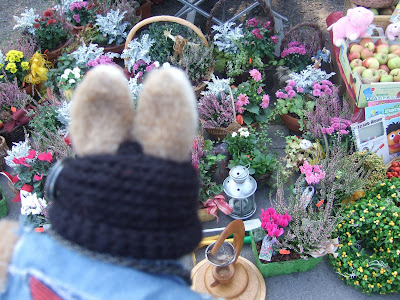 don't buy me any flowers to calm me down, it won't work and I won't care....
yours haselore
Gepostet von Haselore Kohl No comments:

yeah somebun's gonna rock all over u 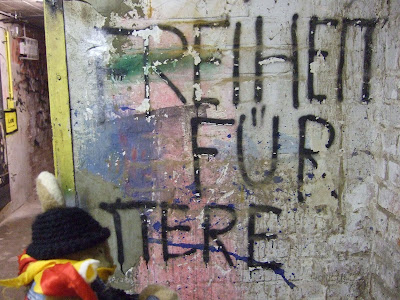 in october i went off to the cellar of some run down youth center a couple of times to trace the roots of hardcore and animal liberation and other stuff that i am really into.... 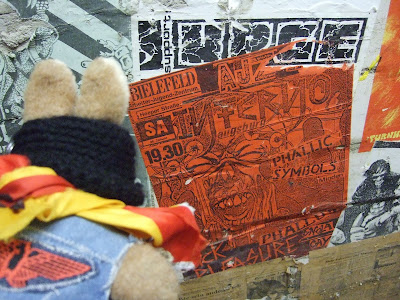 boy there's even a cool grafito by the band that was succeeded by professor! 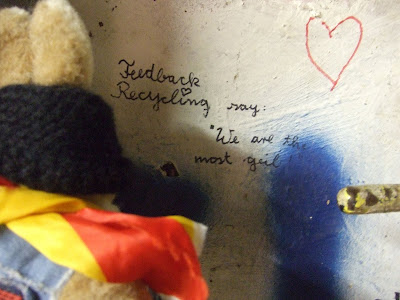 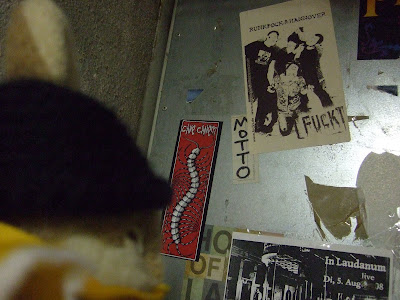 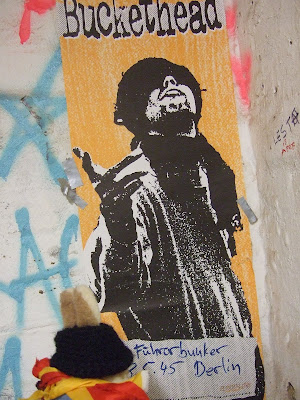 boy that was a real bummer 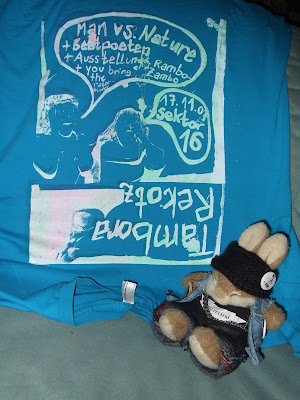 on the saturday and sunday i almost got to meet up with mighty apo calypso from cologne. 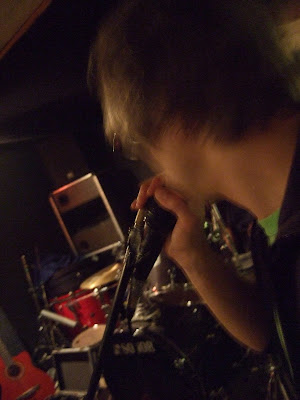 but yes indeedy, I got to meet johnny bottrop of terrorgruppe fame on the friday and I got an interview out of him but more about it in one of my up and coming threads in the future... 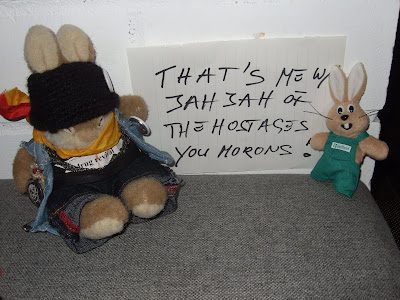 word has it that apo led a big session fronting fritz, alex and varela of hier krepiert fame and featuring one of the singers from drug revival. on sunday apo came in to help out on vocals for at a traing session for stumpf karaoke, made up from current members of cave canem, t-34 and drug revival.

I don't know how this really came about - michel (l) and me had some drinks after tea and i wanted to do the shot with michel at first but thought it cooler to talk hasmuth (r) into being pictured with him as well - so it looks better and more consequent on the bedroom wall.
believe it or not not i had to explain to him who the young lady on the picture was... 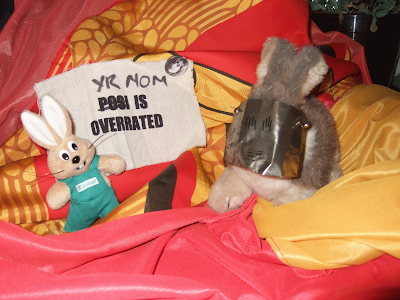 ...and as you can guess he was only into the bang bang parts of her life rather than into the cool and really naughty things. dressed up like reborn cydoh but ain't got no balls
stuff him for that!
for the evening I'll be off watching some hier krepiert and clowni's dj set - well at least for as long as it will take her to have coming up for air - and hopefully other classy some women's lib anthems - but more about that later

have a nice one, yours haselore

btw: the patch is an original by atömgevitter from lower dc glasgow - they are even too tight assed for writing out those vowels these cunny scots, aren't theyyyy.... sid-nayyyy?!?
Gepostet von Haselore Kohl No comments: 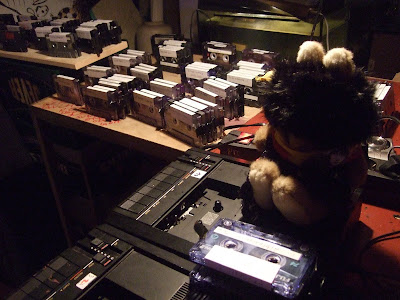 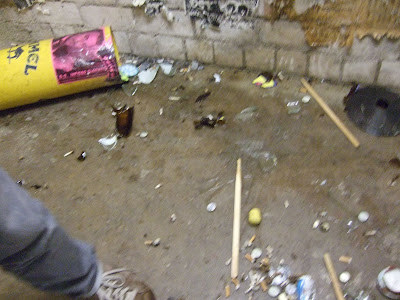 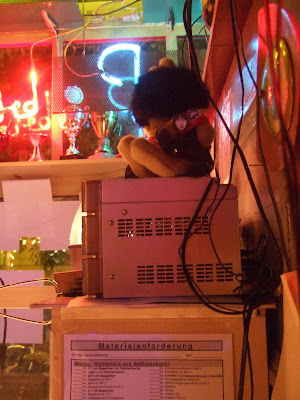 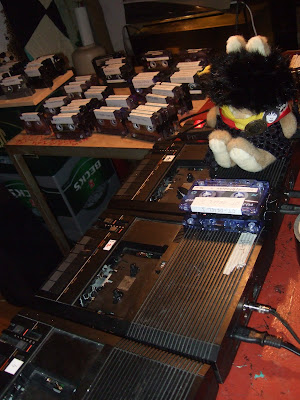 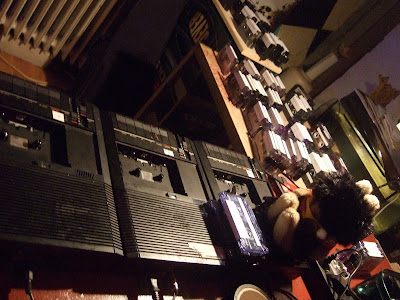 turn of the seasons 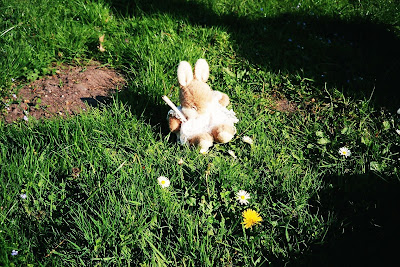 the weather is getting more unfriendly to my cool white dress, no more sitting inna warm sun and smoking some big piece....

grow yourself some fur, yours haselore kohl
Gepostet von Haselore Kohl No comments:

could have been the best one yet ...

yesterday i had to booze in the park on my own to forget my trouble and lose all of my senses - and believe me: it was freezing cold outside and my paws got all numb as for myself not owning any warm boots 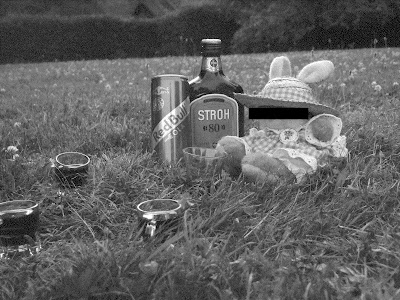 it got very disgusting in the last week (see one of my past threads for scum) and honestly it is getting even more disgusting again so i had to rip this crap from my neighbour's house's wall. 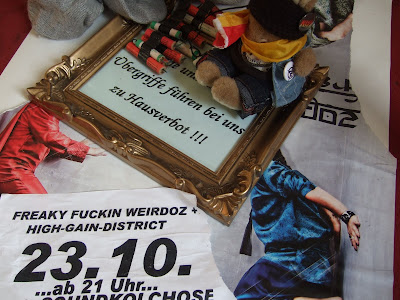 to quote somebun alse: "you gotta be tough when the shit hits the fan"

oh - i forgot: here's today's playlist - just the soundtrack to what i got when I saw this shit - first version is with chavo pederast and second one with kira roessler who gladly never had to think about that scum from munich

as I am a big fan of ducks in general and family duck from duckburgh speaking of in detail - i tried to read a book from grobian gans about them cause somebun said i should read it were important for haselotte and hasgrit and the other bunswicks - but i did not get anybun to translate it properly so I dunno what it said in actually... 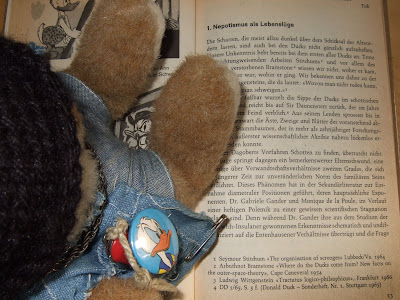 well never mind, have a great weekend and listen to some hüsker dü if you have the chance to do so and you have with this version of wheels - or maybe even better watch black flag on decline of the western civilisation by penelope spheeris or whoever, yours, haselore
Gepostet von Haselore Kohl No comments:

the crime of the century

look at this informational letter that Stefan wrote to the Pervie Co. from US&A here inna germany and that's what they said: 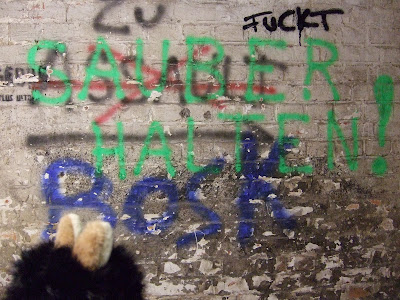