the way it is - meeting up with moses of zap fame 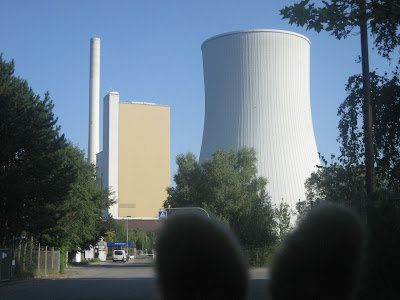 on the lookout for the legendary moses who himself used to be a larger-than-life (absolutely no pun intended 'ere! yours, hk) fanzine writer, the actual name of which bun most sadly cannot remember right know, some passer by sent her to some sunny place - but she could not find her playing anywhere on the village green... 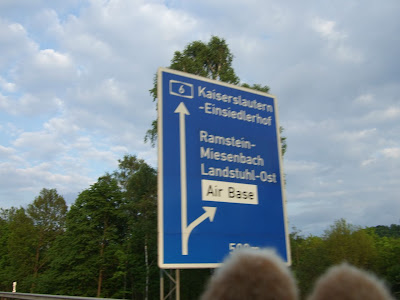 so bun had to move on - until after a right turn she found the right place to try looking her up... 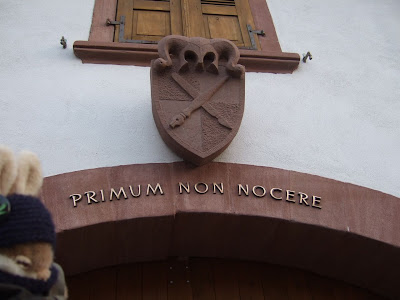 like almost everywhere in southern germany people do have the so called gaunerzinken put to there doors; but apart from that people down they're do not really spend well needed dosh on the maintenance of there houses... 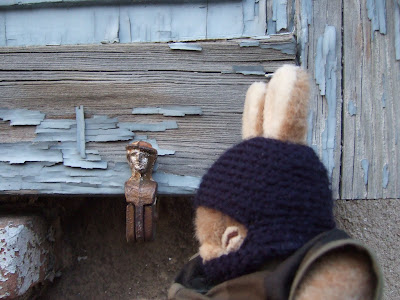 when bun had finally found moses' studio very surprisingly to her the place was closed and the doors all locked up...and it was only late saturday afternoon! 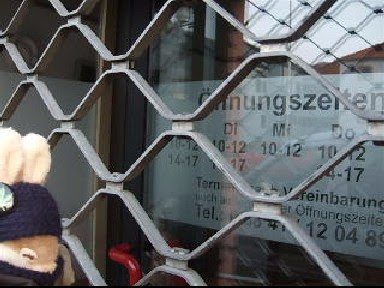 but gladly bun met some local moped lads who informed her that it might be worth looking for the moses down some location called the ajz homburg! 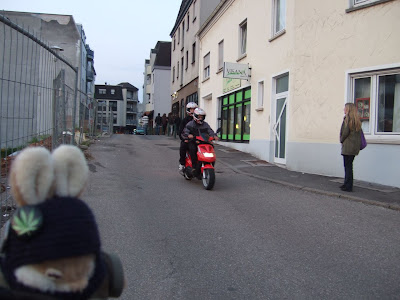 ...but when bun arrived their it very much looked like the place had already been wiped off from the face of the planet! 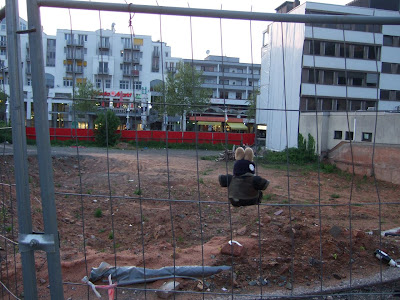 ... so the best idea seemed to be looking round those rather acheronian pubs in town... 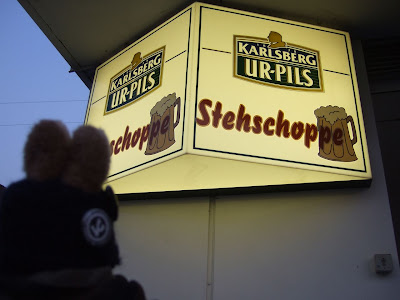 ... having some drink and watching the local blads watch the rhineland-palatinian local news... 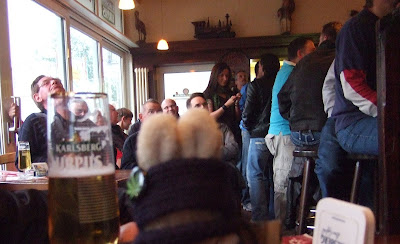 finally on the way back from the restrooms i bumped into the moses! 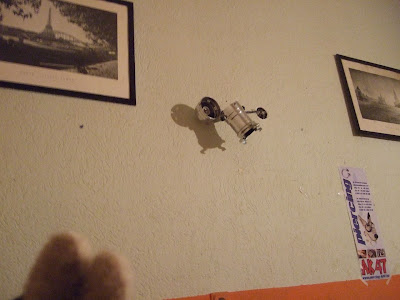 she could be identified very easily by those cool murals she had on her arms and i invited her to my table! 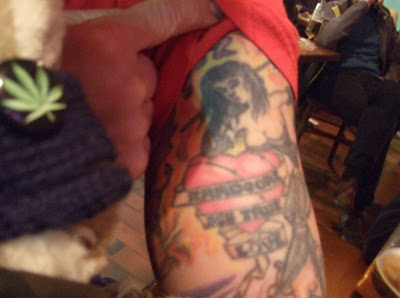 she very much stood out from the rest of the crowd being the author of the recently published novel New York City Hardcore - and know it was time to get her into answering some questions for the grand LFK interview that bun was going to conduct with her! 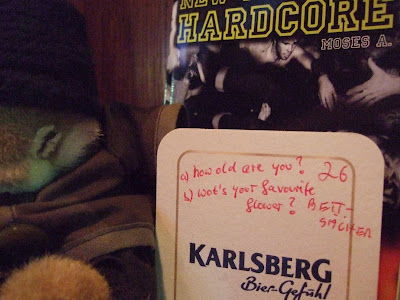 HK: "How old are you?"
MA: "26 YOA"
HK: "alright, gotta keep this short cos u wanna keep this short - question number too: wot#s your favorite flower?"
(note my cool american spelling! yours hk, important editoress of LFK)
MA: "Bettsächer"
HK: "Wot?"
MA: "you have already shown some pictures of this flower on your blog already, young lady, so don't you try to play some dumbass game with me you little b§%&$!!"
HK: "o.k. i'll go through those old photographs of mine once again"
(... and i found them - so here know is an old picture of my beautiful self and some of der pfälzer bettsächer that i've managed to trace in my cool archive! yours HK, important editoress of LFK) 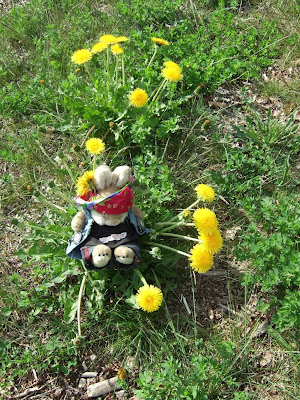 soon after the interview we went to yet another pub for more drinks and the most psychedelic tapestries bun could ever have imagined! 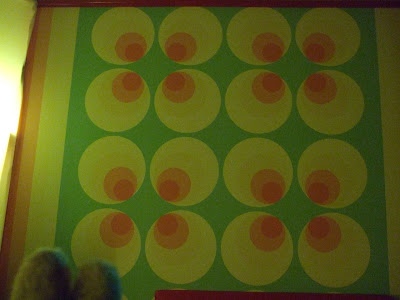 down their bun got to meet some more locals but she hardly could remember there names as these seemed to be coming straight from the french language that i can't understand too well... 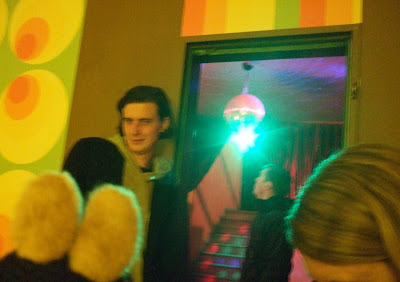 except for the one blad that was introduced to me as "smart "alex"" - cause she were from the UK as well! 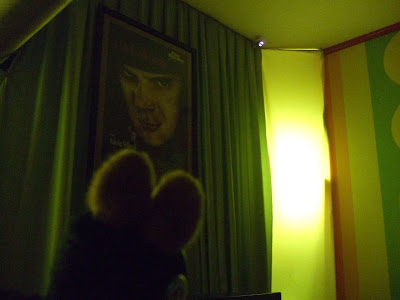 .. the most important exhibit was the telly ray cappo of youth of today would be watching his yoga programmes on when he came down all the way from connecticut to moses' house during there 1989 tour with new jersey's lethal aggression... 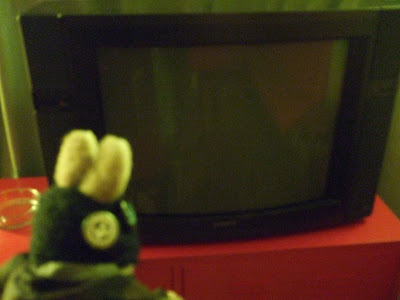 bun still has not been able to fully figure out what exactly her company had put in her drink but all offa sudden the walls started moving around her and she felt like being put inna blender... 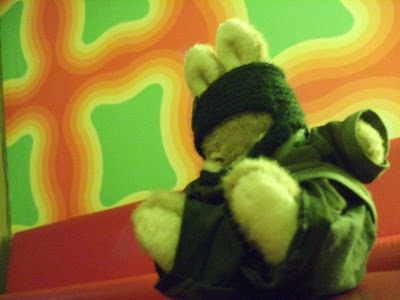 ...and she had to move herself to the restrooms once again...

where she at once fell asleep; very luckily inna protective box that seemed to be placed there just for her sake... 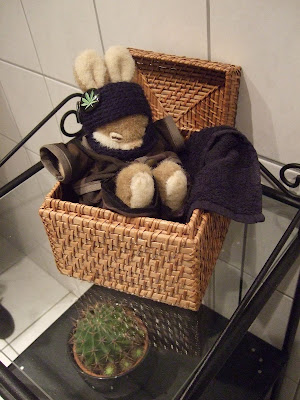 ... right after she had abused it to puke her guts out. 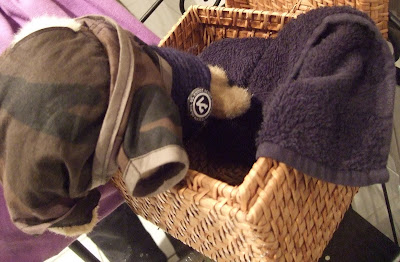 and as y'all can imagine for your beautiful selves - she had problems facing herself inna mirror after she awoke the next morning - still not being sobered up from her heavy nite out... 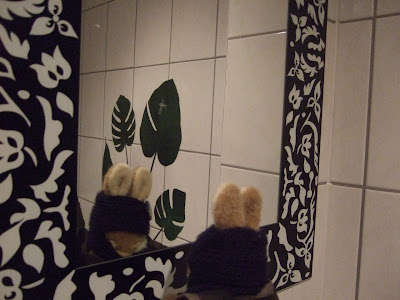 but so wot, y'all be back again for more gossip soon enough, yours haselore kohl 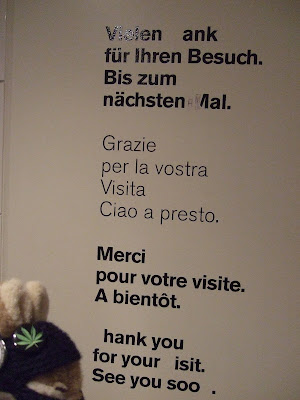