down by the river somebody shot me eardrums 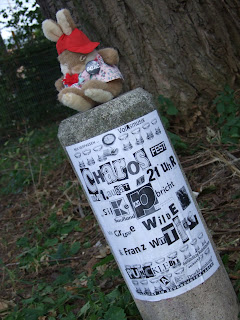 yesterday I was feeling better after my little breakdown i had onna saturday evening due to personal exhaustion when I was going to see the original nordstadt-punk by franz wittich at the silke arp bricht but could not do inna end.
so walked down to the direction of der silke arp bricht to take a closer look at walter's promotional capabilities - in other words i was going on a little walk to check it out with my own to eyes if he really well positioned my promotional posters well down at the club or if he just bragged about doing so...

but I forgot that there was the first weekend inna august zero 9 so all the peasants from the area were gathering at the big shitty that was going on by the riverside: da fährmansfest - as word has it this is the biggest alternative festival around hannover - if you are greedy enough to begin to promote 10 Years After as an alternative rock band from out of the blue for some cheap promotion gag then it probably really is! but inna sense that it was an alternative version of 10 years fucking after but without their only famous member inna person of alvin lee who mad the band their name onna woodstock.

.. but big it is for sure - but nothing more than a gig load o 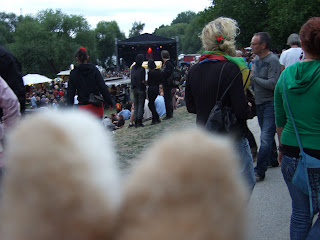 f bollocks ana excuse for the common folk to drink heavily onna sunday afternoon. to make it even worse there was a band the Blumen playing there for free when I&I had my short appearance onna festival sit, probably not only because nobun inna whole world would spend any dough on their so called music but because there're popular band and well received by the crowd there. which says it all and as you can guess the music was total rubbish ..sadly I did not get a video in so that i could show you how horrible they really are..... the blumen actually translates to the flowers inna english language and not to "a pile of shit" which should be more aprropriate. but honestly they should have rather calleded themselves 'the pearly jacket's multiciultural jam band' or something inna dis style but not after anything that I like! 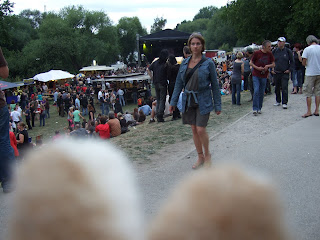 my ears are still hurting today from their shit music that was just too bad to listen to.
so maybe next time i should put more trust in walter. but then all offa sudden I met my friend CK out there who is actually playing on my version of a song by alex krause and he was just as fed up with the place as i was!!!
so the CK took me on his shoulder and we went over the river to have a little drink, a little chat ana little smoke and that really made my sunday evening a nice one!

funny enough word has it that while at the packebusch festival the drunken jerrys fall over the tents there inna hannover it seems that the fritzens they are falling right into the p.a. systems - now that sounds cool but as i weren't there onna saturday night i have not really experienced this first hand though i should probably have! 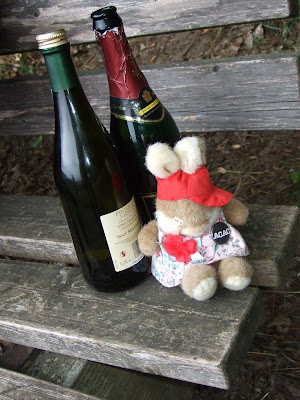 then it got too late ana had to go home again.
and after having seen the lot of it I wonder what's your poison?
yours, haselore
Gepostet von Haselore Kohl