yesterday i was down in the the park near the university building to finally finish my long awaited piece onna trail of dead - but guess what myself ended up to actually: right you are not doing the story in the end... so you gonna have to wait for yet another week on another masterpiece by haselore kohl. 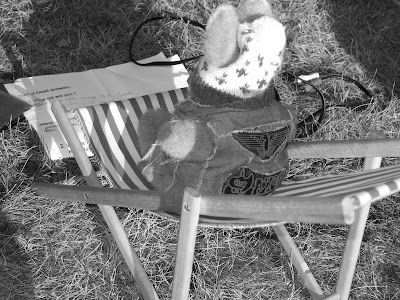 because there was the bowmen demo that i got from their bassplayer that soon started to draw my attention, so that i went for a closer inspection the front cover was a mysterious black and white picture. it looks plainly crap and does not do justice to the music onna cdr at all. because the music is totally different from the weak cover - not to say it is lightyears ahead of it
the recording starts with Inon which is a simple 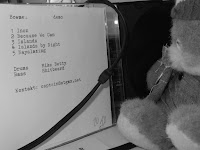 , yet effectively placed bass drone building up right into the second track Because We Can. it is a very big'eaded thing to put onna piece of paper. but this really is a supersonic instrumental rocker really like not a lot else music that I have heard before. it is a well structured forward-ever-backwards-never-styled attack that has some very cool riffing. this is probably called math-core (core like in hard-core) nowadays but it is in a way really worked out but the best thing about it that is real hardcore - music yet - not your usual german run of the mill grindcore from sparwasser in thuringia. Islands, the third song sounds like it is a variation of the second one - but sadly at no point it reaches the intensity and sheer madness of Because We Can. then again a drone intro that creeps into the fifth and last song the title of which i cannot remember at the moment - but it is a slower song - sounds a bit like some queer noise rock. 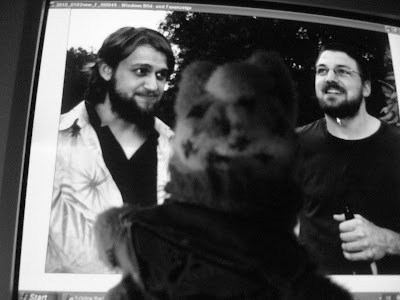 but nevermind the ballots - the bowmen are a great duo and I know for sure that this cdr they have limited to a mere 20 copies is somewhat destined to become a classic demo by the year of 2012. i am not sure but I think that shitbeard and beatty also played together in one of the various incarnations of bringer absturz - i think that this - if it is a fact - can tell you a lot about the strange sound and attitude of those guys from bringer absturz...
i do not think that you can find the bow men on the internet, but you can contact shitbeard at: captain8 at gmx dot de - he sad he sells those demos fuck cheap - for the mere price of a herrenhäuser pilsener at stumpf - so go ahead and get yourself a copy before there gone.